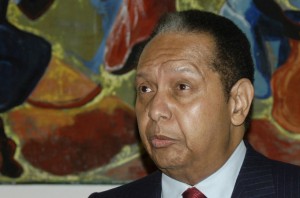 This is bound to result to mixed reactions from citizens of Haiti as Jean-Claude “Baby Doc” Duvalier, who ruled Haiti from 1971 until he fled the country in 1986, died of a heart attack aged 63.

The death of Duvalier, who returned to Haiti in 2011 after 25 years of exile, was announced by the nation’s health minister, Florence Guillaume Duperval on Saturday.

Duvalier became the world’s youngest president at the age of 19 when in 1971 he inherited power from his father, Francois “Papa Doc” Duvalier.

Like his father, he came to rule the nation with an iron fist barring opposition, clamping down on dissidents, rubber stamping his own laws and pocketing government revenue.

The former leader made heavy use of the dreaded Tonton Macoutes, a secret police force accused of kidnapping, torturing and killing up to 30,000 political opponents during the 1960s and 1970s.

The self-proclaimed ‘President For Life’ fled for France in 1986 after riots broke out in a number of cities following his failure to address poverty and illiteracy.

Duvalier’s departure ended nearly three decades of dictatorship begun by his father, in 1957.

In the late 1990s former political prisoners brought charges of “crimes against humanity” against Baby Doc in a Paris court, claiming they were tortured over a period of years, but the lawsuit later foundered.

In 2007, Duvalier called on Haitians to forgive him for “mistakes” committed during his rule, even as the government in power at the time insisted he face trial.

After spending 25 years in France, Duvalier returned to his impoverished Caribbean homeland in January 2011 and was briefly detained on charges of corruption, theft and misappropriation of funds.

Following his return, he took up residence in a villa in a wealthy suburb in the hills above the capital, Port-au-Prince.