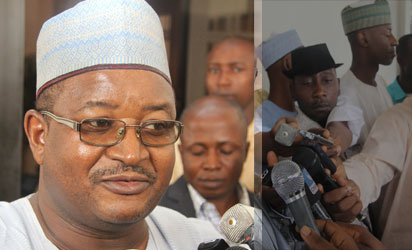 The immediate past Group Managing Director of the Nigerian National Petroleum Corporation (NNPC), Mr Andrew Yakubu, has urged the people of Southern Kaduna to rally round President Goodluck Jonathan ahead of the 2015 general elections.

The ex-NNPC boss also dismissed speculations that he was nurturing a political ambition in 2015.

Yakubu stated these at a grand civic reception and thanksgiving service in his honour in his village, Angwan Wakili by the Atyap Traditional Council of Zangon Kataf local government area of Kaduna State.

He said having worked for President Jonathan, he is convinced that he means well for Nigeria with deep patriotism and determination to serve the country.

He further said that throughout his tenure as head of the state-owned oil corporation, he enjoyed working with President Jonathan, who he said gave him every opportunity and support to discharge his responsibilities to the best of his ability.

Yakubu said: “It must be noted that I enjoyed working with Mr President throughout my time as GMD of the NNPC and that enabled me to discharge my responsibilities to the best of my ability. That ultimately, is my greatest joy, my reward and satisfaction above all else.

“Having worked with the president, I have no doubt in my mind that he means well for the country. Therefore, I urge us all to give him our support in his bid for a second term”, he said.

He said he faced enormous challenges during his tenure at the helm of affairs at the NNPC, particularly the politics, sleepless nights and pressure.

“This is no time to tell the story of my time as GMD – the enormous challenges, the politics, the sleepless nights, the pressure, the successes, achievements and prospects.

“I stand here neither to itemise my achievements or challenges nor rate my performances as I cannot be my own judge. The best I can say is that I went, I saw, I did my best and left the rest to time, posterity and God, who rewards every man or woman according to their work.

“I wish to use this opportunity to state clearly that I have no political ambition whatsoever at this time at the state or federal level; and the allegations that I am sponsoring persons or groups of persons in pursuit of their political ambitions are untrue”, he said.

“However as a Nigerian with full franchise, I have the right to support any candidate of my choice”, he added.

The former GMD of NNPC commended the Atyap community, especially the Angwan Atyap, Dr. Harrison Bungon for welcoming him back home.

Recall that Mr. Yakubu was relieved by President Jonathan of his position as head of one of the country’s most powerful institutions and the source of about 80 per cent of government revenues on August 1, 2014 amid speculations that he did not see eyeball-to-eyeball with the Minister of Petroleum Resources, Mrs. Diezani Alison-Madueke on how best to run the NNPC.