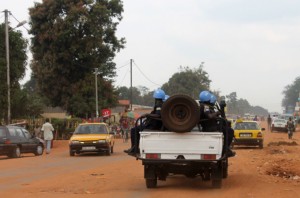 A set of fresh clashes have broken out in the Central African Republic’s capital city of Bangui in renewed violence that is said to be the worst since a United Nations force took over peacekeeping efforts from the African Union last month.

The International Committee of the Red Cross said that the fighting resulted in “many casualties” while the UN reported its first peacekeeper death in the country in an ambush during its mission to calm months of unprecedented violence between Christians and Muslims.

The UN strongly condemned the attack on its convoy who were on patrol of the capital’s KM-11 neighbourhood late on Thursday. A peacekeeper from Pakistan was killed and at least seven others were wounded.

A Muslim man was lynched, decapitated and his body torched by anti-Balaka Christian fighters on Tuesday, and a Muslim Seleka fighters killed a taxi driver in revenge, sparking the latest violence.

Gunfire and explosions rang out in Bangui on Thursday. Streets emptied, shops closed and youths blocked roads with barricades in unrest that appeared to centre on the mainly Muslim KM-5 neighbourhood.

In all, 25 people, excluding peacekeepers, have been wounded since the new round of fighting began, the Red Cross said.

Anti-balaka militia are trying to take over the capital’s KM-5 neighbourhood but are being repulsed by Muslim fighters and peacekeepers, said Mohamed Dhaffane, a vice president of former Seleka group.

“The anti-balaka are demanding the resignation of [Interim President Catherine] Samba-Panza. So there is a political tension on top of the security tension,” he told Reuters news agency.

The security situation in the country has also complicated relief efforts. Doctors Without Borders said its staff was staying home Thursday because of the dangers, and the ICRC said its workers “were subjected to direct threats” as they tried to recover bodies.

“It’s truly regrettable that such actions can jeopardise any attempt to help the wounded,” said Antoine Mbao Bogo, the national president of the Central African Red Cross.

Workers from his organisation, which recovers dead bodies in the aftermath of violence, received reports of at least 12 deaths but could not access the affected neighborhoods and confirm each case.

Human Rights Watch said that the unrest was the most serious in months. Thousands have died and more than one million have fled in the two years of conflict over power and resources.

The UN took over the peacekeeping mission previously run by the African Union in mid-September.