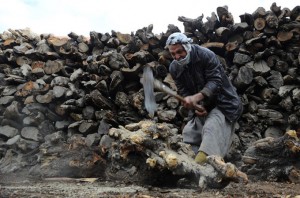 Funding shortfalls have forced the World Food Programme to cut food rations for one million people in Afghanistan, according to the UN food -assistance agency.

The announcement on Tuesday signals increasing aid cuts as the international combat mission in the country comes to an end.

WFP, which runs on donations from member countries, is currently facing a gap of appoximately $30m for its programme, Calude Jibidar, the agency’s country director, told Reuters news agency.

As a result of dwindling support, the WFP has had to food cut rations for one million of the more than three million in need.

“We have had to cut down the rations of the people we are assisting, just so that we can buy some time, so we don’t stop altogether,” he said.

The cuts would reduce the 2,100 calories a day to 1,500 for up to one million people, many of whom have fled their homes due to the escalating violence between the Taliban and the Western-backed Afghan government.

With most foreign troops withdrawing at the end of 2014, many humanitarian groups fear that the aid flow will dry up as donors focus on other crises, including Ebola outbreaks and refugees from Syria and Iraq.

Already there are signs of Afghanistan fatigue among donors.

And while international donors have been generous to Afghanistan over the years, the country’s needs will most likely increase, Danielle Moylan, advocacy manager for the Norwegian Refugee Council, told Reuters.

This year’s UN humanitarian appeal for the country, $400m, is currently $158m short.

“We certainly hope that it doesn’t mean that donors are turning their backs on Afghanistan,” Moylan said.

“If you are withdrawing militarily, you must increase humanitarian assistance because the needs are increasing.”

Afghanistan has received tens of billions of dollars in aid since 2001, when the Taliban’s harsh government based on a strict interpretation of Islam was toppled by a US-led invasion.