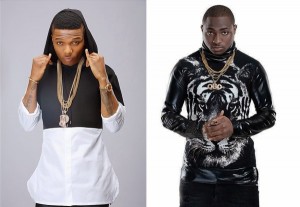 Well, I guess Davido cannot always win everything. When nominees for the 2014 edition of MOBO (Music of Black Origin) Awards were announced, it heightened the already tensed atmosphere as two of Nigeria’s biggest music stars at the moment and rivals, Wizkid and Davido were nominated in the same category of Best African Act award.

With Davido having won the international awards on offer, proclaiming him ‘Best African Artiste’ in 2014, he was thought to stand a better chance at winning the coveted award and most Nigerian music lovers did not even consider a situation that would see both stars losing out on the award.

But that is exactly what happened as neither of the stars won the MOBO award when the awards ceremony finally held on October 22, at the SSE Arena at Wembley, London.

Pulling the rug from their feet was Ghanaian rap superstar, Fuse ODG who clinched the Best African Artiste of the year award, leaving the two Nigerian stars, especially Wizkid who would have sought to equate the scales against Davido, utterly disappointed.

As if they knew the award was heading elsewhere other than Nigeria, both did not bother to travel to London for the award, with investigations revealing Davido was in Lagos on that day while Wzkid was in far away East Africa for double performances in Uganda and Kenya.

Meanwhile, British music star, Sam Smith whose song, ‘Stay with me’ has been the game changer on the global scene in 2014 so far, scooped four awards, going home with the Best RnB/Soul, Best Male, Best Song and Best Album gongs at the end of the event.