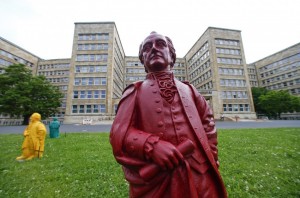 Germany may not be in the top 10 ranking of the just released Times Higher Education world university rankings, but insofar as students from other countries as concerned, German universities are number 1 if only because the country is 100 per cent tuition-free.This happened on Oct 1 when all universities in Lower Saxony declared their schools free of charge. Lower Saxony is the last of seven German states to charge tuition fee.“Tuition fees are socially unjust … They particularly discourage young people who do not have a traditional academic family background from taking up studies. It is a core task of politics to ensure that young women and men can study with a high quality standard free of charge in Germany,” The Times quoted Dorothee Stapelfeldt, Hamburg senator for science.The tuition-free policy, which started in 2006, covers also foreign students enrolled in German universities. While state governments then began to charge €1,000 in response to a constitutional court decision that collecting fees didn’t breach Germany’s commitment to universal post-secondary education, students pressured the academic institutions that eventually led to the scrapping of tuition fees.However, while the news made German students as well as parents happy, some universities disagree with the policy.“It is a for the university … We were obliged to spend the fees we received on investment in teaching, and it gave us the chance to improve the teaching and instruction,” Hamburg University Vice President Dr Holger Fischer catastrophe was quoted as saying in 2011 by The Guardian. At that time, Hamburg just scrapped tuition fees and only Lower Saxony, Bavarias and Baden-Wuttemberg continued to collect tuition fees.To make up for the loss in revenue, Fischer said then that it would cut spending in some areas and by budget regrouping. He warned, “The level of our teaching will have to decrease dramatically,” since he doubted the measures would cover the losses.Meanwhile, international students are concerned on the impact of a plan by Finland to collect tuition fees from enrollees that are from outside the EU/EEA area.