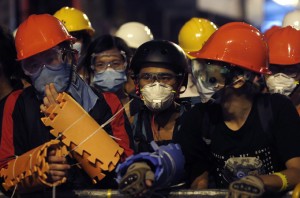 Hong Kong police have clashed with protesters again, with the government saying 20 people were injured in a fourth night of violence after nearly three weeks of pro-democracy rallies.

Dozens of police with shields and helmets pushed into a crowd of protesters gathered at barricades in the shopping district of Mong Kok early on Sunday, striking at them repeatedly with batons.

Some demonstrators had to be carried away on stretchers and others were treated for head wounds, fractures and bruising, according to AFP reporters and medics at the scene.

Police said in a statement that they had used “minimum force” as protesters “suddenly attempted to charge” their cordon lines.

The city’s government information service said 20 people involved in protest activities had been injured between 10pm and 6am, but would not specify how many were demonstrators or police, the extent of the injuries, or if they all took place in the Mong Kok area.

A reporter reporting from Hong Kong later on Sunday morning, said the situation had calmed down but crowds were building up again. He said there were sporadic shouting matches between protesters and police, also involving local business owners fed up with the protests and disruptions they have caused.

The mostly peaceful protests, triggered by a decision by Beijing to restrict the 2017 vote for the territory’s leader, have at times drawn tens of thousands of people and cut off traffic.

Our correspondent said the latest clashes came after activists had issued calls on social media for protesters to expand barricades and take over another intersection in Mong Kok.

“This is a worrying trend for authorities, where protesters are almost using a flashmob tactic,” he said. “It is very difficult for them to control.”

Pictures from the scene of the scuffles showed some protesters wearing helmets, masks and foam pads.

Some injured protesters were taken to nearby Kwung Wah hospital, where activists told AFP that at least 10 were being treated for injuries to their legs, arms and heads, including suspected fractures.

The government said the talks, which will be broadcast live, would be focused on constitutional reform, with both sides allowed to bring five members to the meeting.

However, hopes of any breakthrough are slim, with the government unlikely to cede to protesters’ core demands.

The government-assigned mediator in the talks, a professor known to be pro-Beijing, is also likely to make the process controversial.

The protesters want 2017 elections for a new leader to be fully democratic. Beijing, which took control of Hong Kong from the UK in 1997, is allowing only pre-approved candidates to stand.