The Governor of Adamwa State, Bala Ngillari, on Tuesday reportedly appointed new executives to join in the piloting of his administration.

This was contained in a statement issued by the Chief of Staff, Chubado Babbi Tijjani, a copy obtained by Daily Trust. 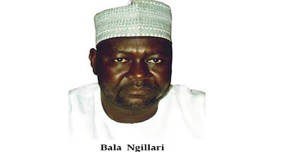 He said those appointed include Ibrahim Andrew Yelwe, who was given the office of the Secretary to the State Government while Dauda Bello Furo was appointed the executive chairman of Adamawa State Universal Basic Education (ADSUBEB).

Tijjani, said Usman Hamidu was also appointed local government Auditor General as well as Ibrahim Iya Gurin, who was given the portfolio of the acting Accountant General.

Others include Usman Bukar, who was appointed the coordinator of the Millennium Development Goals (MDGs), Professor George Moses, deputy chief of staff, Ambrose Abasu, personal assistant, Dr. Ujulu Amos, personal physician, Abdurrahman Bobboi, chief protocol officer as well as Maxwell  Dukku, who was made the press secretary to the governor.

Tijjani further disclose that all the appointees are expected to be sworn in today (Wednesday).

Bala Ngilari was made governor following the directives given to Justice Adeniyi Ademola of the Federal High Court on Wednesday, October 8, 2014, that he should be immediately sworn in as the state governor by the state’s Chief Judge after the removal of Ahmadu Fintiri, the then acting governor of the state.

It would be recalled that the governor had on October 10, 2014, sworn in Justice Ishaya Banu as the state’s new Acting Chief Judge.