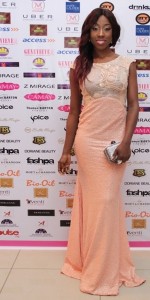 There have been reports circulating that Nollywood actress, Beverly Naya, is now an ambassador of the Virgin Atlantic Airways.

The actress took to her Instagram account yesterday, October 25, 2014 to post a photo of a brand launch saying, ‘Live at #Ventanas for the main launch party; I’m wearing @gozelgreen tonight. #PartyTime#BNVirginAtlanticInAtlanta #VirginAtlantic #Atlanta.’

Beverly, who studied Philosophy, Psychology and Sociology at Brunel University, began her career in the entertainment industry after studying script-writing and film-making at Roehampton University, England. It however, remains to be seen if she or the company will make an official announcement soon or if she was just being supportive of the brand.