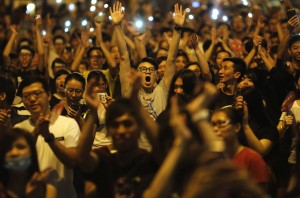 The protest have intensified as the mob of protesters in Hong Kong have asked that the city’s leader meet a deadline to resign on Thursday, as China warned the United States against meddling in its “internal affairs”.

Demonstrators, who have shut down central areas of the southern Chinese city for four days, have given chief executive Leung Chun-ying until midnight to step down, or face escalated action – including the occupation of government buildings.

On Thursday morning, thousands of protesters continued to camp out in the main streets of the Chinese autonomous region.

The Associated Press news agency reported that police manned barricades at a nearby intersection, with protesters camped on the other side, huddled under umbrellas.

“It’s too late for [Leung’s] government to be accountable to the people, so we want a new one,” May Tang, a 21-year-old student protester, told AP. With the protests showing no signs of waning, China’s foreign minister, Wang Yi, issued the warning to the US and other foreign countries not to interfere.

Reuters news agency, citing an official source, reported that Leung was willing to let the demonstrations go on for weeks if necessary.

Speaking in Washington, the foreign minister added that Beijing would not tolerate “illegal acts that violate public order”.

The People’s Daily newspaper, the government’s official newspaper, said in a commentary on Thursday that Beijing “fully trusts” Hong Kong’s Leung, and that it is “very satisfied with his work”.

The week-long street protests by thousands of demonstrators pressing for electoral reforms in Hong Kong are the biggest challenge to Beijing’s authority since China took control of the former British colony in 1997.

They were triggered after the Chinese government restricted who can run as the commercial hub’s next chief executive, or leader, in elections scheduled for 2017.