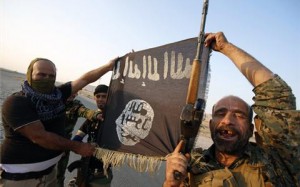 The Iraqi army has withdrawn from its last base in the city of Hit in Anbar province following weeks of fighting with the ISIL, leaving the group in full control, security sources have said.

Hundreds of troops were pulled out of the base and relocated to help protect the Asad air base, the AFP news agency quoted a police colonel in the provincial capital of Ramadi as saying.

“Our military leaders argued that instead of leaving those forces exposed to attacks by ISIL, they would be best used to shore up the defence of Asad air base,” he said.

Asad, northwest of Hit, is one of the last still under government control in the western province. It is surrounded by desert and a tougher target for ISIL fighters.

Other security officials said military aircraft picked up senior officers from the Hit base, and the rest of the force drove in a convoy to Asad.

An Iraqi officer and Sunni militia fighters told the Reuters news agency that ISIL looted three armoured vehicles and at least five tanks, and then set the camp ablaze.

Government forces have suffered a series of setbacks in Anbar in recent weeks, and officials have warned that their grip on the capital Ramadi was increasingly tenuous.

“Amiri is a very key town, that is where the main supply line from Anbar province into Baghdad and the rest of the south of the country goes from,” he said.

Up to 180,000 people have been displaced by fighting in and around Hit, the UN office for humanitarian affairs said on Monday.

The city had been home to 100,000 people who had fled other areas of Iraq which had fallen to ISIL, it said.

During a visit to Baghdad on Monday, the British foreign minister Phillip Hammond said ISIL would only be defeated by “heavy work on the ground” by Iraqi forces.

”We’ve always understood that the air campaign alone was not going to be decisive in turning the tide against ISIL but it has halted the ISIL advance … and it is degrading their military capabilities and their economic strength,” he said.