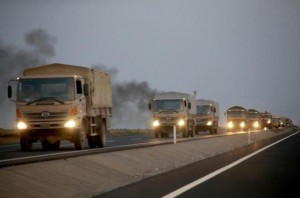 Fighters from the Islamic State in Iraq and the Levant have shelled the border crossing between Syria and Turkey in their latest attempt to stop an expected arrival of Kurdish fighters from Iraq to help defend Kobane.

Friday’s bombardment of the Mursitpinar post came a day after a first contingent of Iraqi Kurdish peshmerga fighters entered the Syrian town of Kobane from Turkey to join the effort to break an ISIL siege.

ISIL on Friday also hit the al-Jemrok district in the north of Kobane with mortar shells and heavy machine gun fire, A reporter in the town reported. They also attacked Kurdish forces using a suicide car bomb.

ISIL attacked Kobane six weeks ago, capturing dozens of nearby Kurdish villages in addition to parts of the border town. Kobane is now under attack from three sides and weeks of US-led air strikes have failed to break the ISIL assault.

Syrian Kurds have pleaded for advanced weapons to help them gain the upper hand.

Around 100 fighters arrived by plane to southeastern Turkey on Wednesday, joined later that night by a land convoy of vehicles carrying arms including a cannon and truck-mounted machine guns.

Activists say there are about 1,000 Syrian Kurdish fighters and more than 3,000 ISIL members in the Kobane area.

On Wednesday, a group of 50 Syrian rebels entered Kobane – also via Turkey – in a bid to help. The rebels are members of the Free Syrian Army and were meant to help the long-awaited Iraqi peshmerga fighters and the town’s Kurdish defenders.