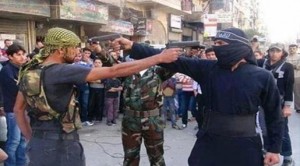 In a latest development, fighters from ISIL have penetrated the Syrian town Kobane for the first time, sparking street-to-street fighting and an order from its Kurdish defenders for all civilians to flee.

Two black ISIL flags were seen flying on Kobane’s eastern side on Monday, according to the Syrian Observatory for Human Rights, while there were reports of ISIL fighters entering the town from the east.

“Urban guerrilla warfare has started and the fighting is taking place for the first time in districts at the eastern entrance, in Maqtala al-Jadida and Qani Arab,” said Rami Abdelrahman, the observatory’s head.

“Military officials asked civilians to evacuate – they declared Kobane a military area,” said the spokesman identified by AFP as Mustafa Bali. “ISIL advanced to the eastern side. There were fierce clashes in the streets,” he added.The AFP news agency quoted a spokesman for Kurdish forces as saying that all civilians had been told to leave immediately.

Kurdish activists stated that one group of ISIL fighters were eliminated by the town’s defenders, drawn from the Kurdish irregular force known as the YPG, as they attempted to enter from the east.

The UK-based observatory added that at least 20 fighters were killed late on Sunday when they entered an eastern neighbourhood and were ambushed by Kurdish YPG fighters.

In a sign of mounting desperation, a Kurdish female fighter blew herself up at an ISIL position east of Kobane on Sunday, the observatory said. It was the first reported instance of a female Kurdish fighter employing a tactic often used by ISIL fighters.

According to Reuters news agency, at least 30 Kurdish fighters were killed in two suicide attacks on two checkpoints run by Kurds in Syria’s northeastern city of Hasakah.

Kobane has become a crucial battleground in the international fight against ISIL fighters. The battle has forced an estimated 186,000 civilians to flee to Turkey.

The Turkish parliament in Ankara last week authorised the government to join a US-led campaign against IS, but no plans for military action have been announced so far.