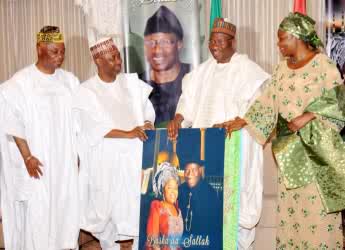 Terrorism has nothing to do with Islam. This was the position of President Goodluck Jonathan in his message to a delegation led by Vice President Namadi Sambo that visited him at the presidential Villa on Saturday.

According to President Jonathan, nothing can be regarded as Islamic about the havoc the terror sect Boko Haram has been wreaking on Nigeria’s north east.

“What is happening globally now has no religious basis. Only yesterday, a British aid worker was slaughtered by ISIS and that is not Islamic.

“Boko Haram killing innocent children and women in market places, in mosques and schools definitely has nothing to do with religion,” he said.

Jonathan said with the Day of Arafat coinciding with a Friday, a very rare occurrence, and this year being Nigeria’s centenary year, it shows that something good is happening to the country.

“We may have our challenges as other nations, but when things begin to happen in a particular way, I begin to see light at the end of the tunnel.

“A number of things that have to do with our belief system suppose to encourage us to see our neighbours as ourselves,” he said.

He congratulated Muslims all over the world on the Eid-El-Kabir celebration and urged them to use the period to seek God’s mercy for those hiding behind religion to perpetrate evil.