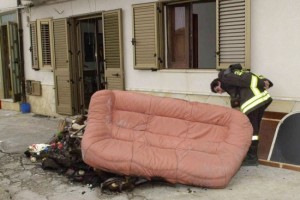 For 10 years, the residents of the Sicilian village of Canneto di Caronia have been utterly spooked by hundreds of mysterious, unexplained fires that seem to erupt out of nowhere. The bizarre phenomenon, which has seen a sudden surge this year, includes spontaneous combustion of mattresses, beds, cars, and devices like fridges and mobile phones, even when switched off.

The episodes have attracted the attention of geologists, physicists and volcanologists for several years, but no one has been able to provide an accurate scientific explanation so far. Naturally, the villagers are blaming supernatural entities like UFOs, poltergeists, or other demonic forces. And with no other logical reason in sight, one tends to wonder if they actually might be right.
It all began in January 2004, when, without any apparent cause, appliances (including a cooker and a vacuum cleaner) in several houses began to catch fire. Wedding presents, random pieces of furniture, and even a water pipe erupted into flames. In response, the local electric company tried cutting off the power supply to Canneto, but that made no difference. The village was evacuated and a through investigation was conducted, but the experts and authorities simply failed to locate the problem.

Even with the arrival of volcanologists from the National Institute of Geophysics and Volcanology, and a team of experts from the Italian Navy, no viable solution was found. Understandably, the villagers were terrified, and a few of them even suggested calling in a priest to conduct an exorcism. Months went by, and a period of calm followed, when most of the villagers returned to their homes.
Unexplained fires still occur from time to time, and the villagers have pretty much learned to live with them. Other bizarre events have taken place as well – there were unexplained leaks from water pipes of three different houses, a vanity mirror in a bathroom caught fire three times in 35 hours, and an entire plantation of eggplants developed rainbow-like colors, making them unfit to be sold.

Air conditioners have spontaneously melted, car glasses have imploded, hard drives have been erased, automatic gates started opening and closing randomly, and animals have died mysteriously. Without any science to explain these events, it’s easy to see why the whole affair appears sinister. I’d be pretty terrified too if I were living in Canneto.
In April 2005, the Italian government created a special Task Force (of high-ranking army officers, engineers, architects, geologists and physicists) to investigate the situation in the sleepy little village. The group conducted an extensively thorough analysis – aerial photo-remote sensing, assessment of geophysical and geochemical data, detection of magnetometric and electromagnetic fields, radio-electric spectrum monitoring, and more. The results, however, were inconclusive.

In 2007, an Italian newspaper published a leaked interim report from the Civil Protection Department, concluding that the only plausible explanation was ‘aliens’, because the fires were ‘caused by high power electromagnetic emissions which were not man-made and reached a power of between 12 and 15 gigawatts’. A year later, the case was dismissed following further investigation – they just attributed it to an ‘unknown electromagnetic radiation’.
But in the absence of tangible evidence, people have returned to supernatural theories. Sicily’s council member for health and safety, Vittorio Alfieri, said in an interview that the fires were caused by ‘an entity’ that ‘transfers from one house to another’. “A house on the ground floor caught fire then it was the turn of objects on the first floor,” he said. “Consequently, the fire moved to a nearby house. It was like moving.”

Now, after a period of respite, the inexplicable fires have returned to plague the citizens of Canneto. On September 30th, a series of fires were reported throughout the otherwise peaceful settlement. First, a chair covered in cellophane caught fire for no apparent reason. Hours later, someone else called the fire department to report a stack of folded clothes had burst into flames, and then an entrepreneur who was getting ready to drive away in his car but returned to get something he had forgotten from the house, found his vehicle burning. A book and a sofa were also found scorched for no apparent reason in different areas of the town.According to media reports, the locals have once again been evacuated, while a small team of fire fighters have been assigned to control the small fires.

Several fantastical theories exist – some have even gone as far as claiming that this could all be the work of a single individual who suffered strong emotional distress at a young age (a lot like Stephen King’s Carrie), and is now attracting the curiosity of UFOs. Well, there’s no limit to human imagination, and unless a real scientific explanation emerges, each theory is just going to be wilder than the next.