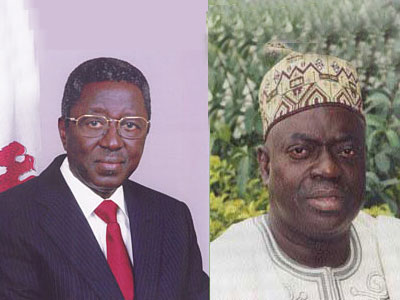 Governor Jonah Jang of Plateau State and his Niger State counterpart, Dr. Babangida Aliyu, on Thursday refuted the claim by the Progressives Governors’ Forum that the Federal Government was starving states controlled by All Progressives Congress of funding.

They spoke in separate interviews with State House Correspondents shortly after attending a meeting of the National Economic Council at the Presidential Villa, Abuja.

Rising from their meeting in Ilorin, Kwara State capital on Wednesday, the PGF, through their chairman and Imo State Governor, Owelle Rochas Okorocha, alleged that the Peoples Democratic Party-led federal government was funding states controlled by the party through the backdoor while depriving their own states of funds.

But Jang and Aliyu said making such a statement was tantamount to mere playing of politics.

According to Jang, all states of the federation were experiencing the negative effect of dwindling federal allocation.

He said it would therefore, be wrong to accuse the government of funding only PDP states.

The governor added that the lesson to be learnt in the present situation was for all state governments to stop excessive reliance on monthly federal allocation.

In his reaction, Aliyu, who is also chairman of the Northern States Governors’ Forum, said there was no iota of truth in the APC governors’ claim.

Aligning his position with Gov. Jang, Aliyu said it was time for state governments to increase their Internally Generated Revenue drive in order to reduce their dependence on monthly allocations.