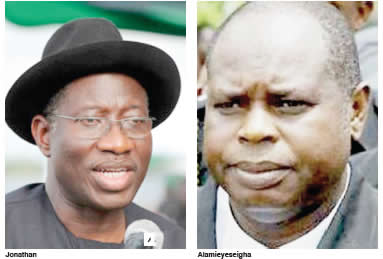 President Goodluck Jonathan has extended his condolences to a former Governor of Bayelsa state, Diepreye Alamieyeseigha, over the death of his son in Dubai, the United Arab Emirate.

In a statement by his special adviser on media and publicity, Dr. Reuben Abati, Mr. Jonathan said the Federal Government would assist the Alamieyeseigha family in getting to the root of their son’s death.

There are conflicting reports of how Alamieyeseigha’s son, Oyamuyefa, died. While some reports say he was found murdered on the streets, others claim that he committed suicide in an elevator.

Mr. Alamieyeseigha, while confirming his son’s death, however, declined to provide details.

President Jonathan said he received the news with shock and immense sadness.

“On behalf of his family and the Federal Government, President Jonathan extends heartfelt condolences to Oyamuyefa’s father, Chief Diepreye Alamieyeseigha and his entire family on the untimely loss of a very dear son in the prime of his life.

“The President and the First Lady, Dame Patience Jonathan share their pain and grief over the death of Oyamuyefa in circumstances that are still unclear.

“President Jonathan assures Chief Alamieyeseigha and his family of the full support of the Federal Government as they strive to unravel the true circumstances of the young man’s death.

“He prays that God Almighty will receive Oyamuyefa’s soul and comfort his grieving parents and siblings”, the statement said.