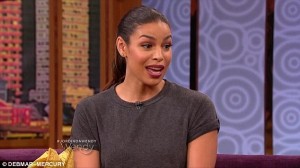 Wow, this is even more serious than I thought. Weeks after her recent split from fiancé, Jason Derulo over cheating allegation after three years of dating, American singer and actress, Jordin Sparks is on the verge of returning the luxury BMW vehicle he gave to her as a gift.

In an interview on ‘The Wendy Williams Show’ the ‘ No Air’ singer, who insists that she and Derulo are now nothing more than good friends, said: ‘I haven’t really had time to think about it, but yeah, I probably will(return the car),’ the singer and actress replied. She soon added: ‘He can have it.’

Jordin Sparks rose to fame in 2007 after winning the sixth season of American Idol at the age of 17, becoming the youngest winner in the series’ history and she has gone on to achieve worldwide acclaim with her singles including the very popular ‘No Air.’