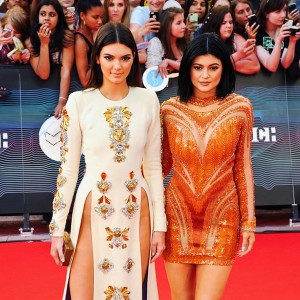 It’s quite clear that the fame and fortune of the senior Kardashian sisters has rubbed off on the much younger ones.

Kendall and Kylie Jenner who really have no talents or job have been listed alongside Jaden Smith and Lorde on Time magazine’s most influential teens of 2014.

The ‘Keeping Up with the Kardashians’ stars were listed alongside inspirational youngsters such as a 14-year-old transgender activist Jazz Jennings and 17-year-old Malala Yousafzai, the youngest-ever recipient of the Nobel Peace Prize.

The siblings’ achievements are described in the publication thus: ‘Together, the ‘Keeping Up With the Kardashians’ co-stars hosted red-carpet events, released clothing and nail polish lines and even published a dystopian young-adult novel this past summer (though yes, they had some help). ‘But they’ve had solo success too – Kendall with modelling (she’s walked the runway for designers like Marc Jacobs) and Kylie with pseudo-entrepreneurship (she’s launching a line of hair extensions and hopes to get into acting). Next up: a multimillion-dollar mobile game?’