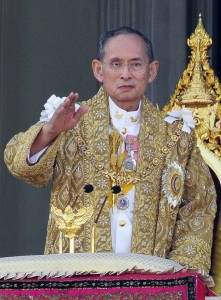 Thailand’s King Bhumibol Adulyadej has been hospitalized with a high fever and irregular blood pressure, the palace said Saturday.

The king, who was admitted to a hospital in Bangkok on Friday evening, appeared to be improving.

“On Saturday morning, his medical team announced that after being administered antibiotics intravenously, his blood pressure stabilized and his fever dropped,” the palace said in a statement.

The 86-year-old is a member of the Chakri dynasty, which has occupied the Thai throne since the 18th century.

The U.S.-born and Swiss-educated king is a deeply revered figure whose unifying appeal stretches across all elements of Thai society, from the rich urban elite to poor provincial farmers.

He ascended to the throne in 1946, and has reigned over more than 20 prime ministers, 17 military coups and 17 constitutions.