A Lagos High Court in Ikeja on Wednesday freed and cleared a socialite and businessman Fred Ajudua of a supposed $1.69m fraud accusationbrought against him in 2003 by the Economic and Financial Crimes Commission (EFCC).

Ajudua and his co-worker, Charles Orie were discharged of the charges by Justice Kudirat Jose. 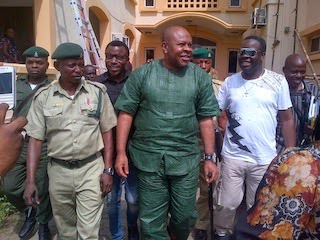 The judge said, “The charge against the defendants is hereby struck out. The defendants are accordingly discharged.”

Ajudua is supposed to have defrauded two Dutch businessmen of $1.69m which he and his co-defendant Charles Orie ensured will help simplify government contracts worth $18m.

The EFCC Counsel Mrs E.A Sanusi said that some key prosecution witnesses denied to come to Nigeria to give evidence against Ajudua noticing the current outbreak of Ebola in the country.

She told the court that in the circumstance, the EFCC has no other choice but to ask for the withdrawal of the case.

It would be recalled that Ajudua and his co-defendant, Charles Orie were first charged before Justice Joseph Oyewole in 2003 for supposedly deceiving Remy Cina and Pieere Vijgen (two German businessmen) of $1.69 million, but skipped payment in 2005 until their return in 2013 after an arrest warrant was delivered by Oyewole.

Ajudua is, on the other hand, accused of defrauding a former Chief of Army staff, Gen. Ishaya Bamaiyi of $8.4m while they were both at the Kirikiri prison in Lagos between November 2004 and June 2005.