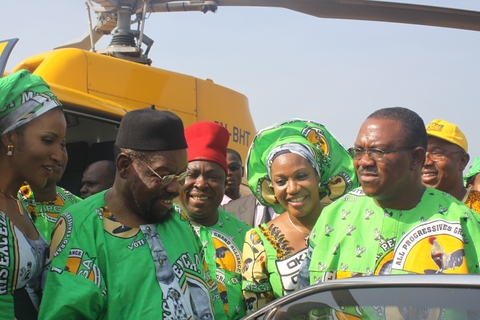 Mr. Obi some few weeks ago defected to the PDP despite reassuring in the past that he would sink or swim with APGA, the party, on whose platform he was elected governor twice.

Reacting to the development in a chat with reporters in Awka, the Anambra State capital, Ben Obi, who also served as SSA to the ex-governor, said that it was in his presence that the late Ojukwu asked Obi three times if he would leave APGA to which the immediate past governor vowed that such a thing would never happen. He said: “I saw his defection coming because I worked with him as SSA on inter party affairs and throughout the period he was in court fighting to get his mandate back.

“We grew up together and attended the same school and I knew that Obi is very crafty, which sometimes fail him.

“During his tenure, we were at the Holy Trinity Cathedral, Onitsha when Ojukwu fainted. I had to carry him in my Hummer Jeep to the nearby Waterside Hospital for treatment and as I was singing a song to him, Obi came in.  At that point, Ikemba raised his head and asked Obi if he was sure he would not leave APGA and he answered yes. Ojukwu repeated the question two times and this made Obi to swear with a bible he was holding that he would never leave APGA to any other party.

“Ojukwu asked this the question because he suspected that the former governor would dump APGA as soon as he (Ojukwu) was no more. It was unfortunate that he did not keep to that promise”.

It would be recalled that following Mrs. Bianca Ojukwu’s reaction to his defection, which she described as disappointing and demoralizing, Peter Obi acknowledged making a vow to the late Ikemba when he was alive that he would never leave APGA for another party.

“I wish to reiterate that I am still loyal to our great leader in terms of what serves the interests of our people and the Federal Republic of Nigeria. Everyone knows today that APGA is not what it used to be.

“My assurance to our great leader did not imply that I would be loyal to a platform that some people have resolved to turn into an empty shell without an inner core of shared values. I remain faithful to those values and principles our great leader asked me to stand by and defend”, the ex-governor was quoted as saying.

However, the special assistant to Gov. Obiano would have none of it as he recalled that Obi once said that leaving APGA to PDP was like going to Iraq, adding that by eventually joining PDP, he is in Iraq and he knew the consequences.

He also said that it was unfortunate that the former governor castigated Governor Rochas Okorocha of Imo State for leaving APGA when it was obvious he too was planning to do the same thing as soon as he left office.

Ben Obi also said that it was because of the former governor that APGA lost all the senatorial seats in 2011, particularly that of Anambra Central contested by the late Professor Dora Akunyili.