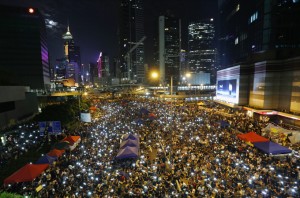 Hong Kong’s embattled leader has said ongoing protests have “almost zero chance” of changing Beijing’s stance in securing free elections and insisted he will not resign.

In an interview broadcast on local channel TVB on Sunday, Leung Chun-ying said street protests had “spun out of control” and warned it was highly unlikely the action would alter Beijing’s position.

“In achieving universal suffrage in 2017, if the prerequisite is to put down the Basic Law and the decision made by the National People’s Congress Standing Committee, I believe we all know that the chance is almost zero,” Leung said.

Whe asked about the protest camps, Leung was unable to say specifically how the current stalemate could end.

“The way we resolve it in the end is being constantly reviewed. We absolutely would not prefer clearing the venue, but if one day the venue has to be cleared, I believe the police will use their professional judgement and training using minimum amount of force,” he said.

Tens of thousands of people have occupied Hong Kong’s streets in the past two weeks, protesting China’s restrictions on the city’s first-ever direct elections for its leader, promised for 2017.

In August, Beijing announced that only two or three vetted candidates will be allowed to stand as successor’s to Leung, an arrangement the protesters dismiss as “fake democracy”.

Students and pro-democracy campaigners have been calling on mainland China to grant full democracy to the former British colony and allow full, free and fair elections and Leung’s resignation.

Despite repeated orders to disperse, the rallies have taken on an air of permanence, with tents, portable showers and lecture venues drawing thousands of people in recent evenings.

Crunch talks between student leaders and city officials collapsed last week, deepening the crisis in the semi-autonomous city as protesters vowed to dig in for the long haul.