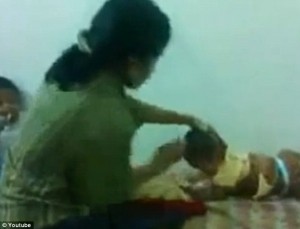 A video of a teenage Malaysian mother beating her baby daughter has generated a storm of outrage online a year after it was filmed, prompting the Malaysian Police to announce that the woman is already serving an 18-month prison sentence for the offense.

In a post on their Facebook page this week, the Malaysian Police said they had received hundreds of complaints and comments about the case after the four-minute video of the mother repeatedly striking the baby with her hand, her foot and a pillow went viral.
The baby was put into the care of a foster family after her mother’s arrest and is now doing ‘very well,’ said Fatimah Zuraidah Salleh, deputy director of the children division of the Social Welfare Department to CNN.

The court will decide whether the mother, who is due to be released in late November, will be allowed to regain custody of the child.