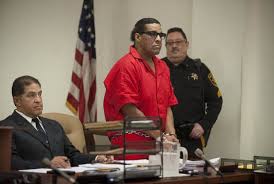 The man from New Jersey reportedly raped his daughter and stepdaughter in his den for FOUR YEARS! Allegedly The two girl’s claimed that even their own mother tried to prevent anyone from noticing them.

The young girls did not see light for the entire time and claimed that they were afraid every second of their torturous kidnapping.

Howard Gregory, 50, was sentenced on Thursday by Camden County Superior Court Judge Edward McBride and will live the next 45 years in prison.

“It’s very hard to find the words to convey the hell my family and I lived in on a daily basis, not knowing when I would take my last breath,” one of the victims said during an interview. “I have lived in hell for years and have pain and scars that have yet to completely heal. I believe that Howard should receive the same mercy that he’s given to myself and my family, and that is none.”