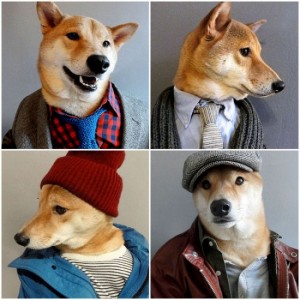 Bodhi the dog has no time for silly pastimes like chasing squirrels or playing fetch – he’s quite serious about his high flying career as a top New York menswear model. The four-year-old Shiba Inu is well known in fashion circles as ‘Menswear Dog’ – he has landed paid modelling contracts with top brands such as Coach, Todd Snyder and Salvatore Ferragamo. He’s also a social media sensation with over 140,000 followers on Instagram.

Bodhi’s owners – Yena Kim, 27, and Dave Fung, 29 – came up with the idea as a joke; they dressed up their adorable Shiba Inu in a few fancy suits and hats. When they posted photographs on their Facebook page, the response they received was overwhelmingly positive. So they started their own Tumblr page featuring Bodhi dressed according to popular fashion trends.

“We didn’t have any epic plans when we started our blog,” said Yena, who has worked as a fashion designer for Ralph Lauren. “We were bored one Saturday afternoon so we decided to pass the time by dressing up our handsome Shiba in serious menswear.”

“Everyone who has a dog has put clothes on their dog at some point, just to goof around,” added Dave, who has a decade of experience as a professional graphic designer. “We just found out that when we put clothes on him, he lit up, he started posing for us.”

They posted the pictures online, and according to Yena: “The response was unreal, so the next day was spent putting together a Tumblr. The following day, our Tumblr was featured on GQ Magazine’s website and it just snowballed from there.”

Soon, the fashion-savvy canine amassed an army of followers and there was no looking back after that. Bodhi started receiving countless requests for collaborations with fashion labels.

“Initially we got some criticism from people who thought he might be uncomfortable in human clothes,” said Dave. “But it turned into people criticising his outfits and telling us what shirt would look better with what tie – and that’s when we knew we were successful.” And it appears that Bodhi quite enjoys being photographed in an array of stylish outfits. He’s such a natural model, and he really does seem to know how to work with the camera.

“He likes to wear clothes that will get him the most attention and peanut butter, he knows he can pull off anything so he’s not all that concerned,” said Yena. “The first time we dressed him up, we saw a spark in his eye and he sat still and gazed at the camera, no directions needed.”

“We receive most of the clothes from the brands that we are working with, but we’re constantly shopping around for the most exciting items in menswear to show on Menswear Dog, since we’re both designers, we design and create the clothes that he wears to appearances,” she added.

Yena and Dave are currently working on a clothing line for dogs, and hope to collaborate on projects that benefit animal charities. “We both decided to quit our jobs for this mainly as an excuse to take a break from the 9 to 5 and do something a little less ordinary for a bit,” Dave explained.

“We’ve been so blessed with Bodhi and we know that every animal has something special and unique about them, so we’ve never been more motivated,” he added. “At the end of the day, he’s the boss!”