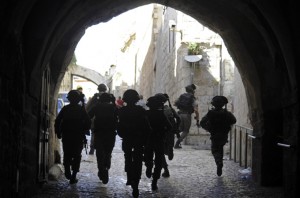 Members of the Knesset, Israel’s parliament, have stood alongside hundreds of Palestinians in a peaceful protest outside the Lion’s gate of the Al-Aqsa mosque compound in occupied East Jerusalem.

Wednesday’s gathering was called to protest against the rules and restrictions imposed by the Israeli government on Palestinians wishing to enter Al-Aqsa to pray.

The group of about 500 Palestinian worshippers were later dispersed by the Israeli security forces in a repeat of the clashes seen on Monday, reporters on the ground said.

Tension at the site, which is the holiest site in Judaism and the third holiest in Islam, has come to a head over the past few days as Jewish worshippers have been allowed into the site to celebrate the festival of Sukkot, while security forces are denying access to Palestinians under the age of 50.

Sources reporting from Jerusalem, said the sight of Jewish worshipers praying within the compound was stirring up the emotions of the Palestinians barred from the compound.

“Knesset members are protesting against the Israeli government’s restrictions against Palestinian worshipers while allowing Jewish groups to have access,” she said.

“They are concerned this trend may lead to a division of the Al-Aqsa compound.”

On Wednesday, Dr Riyad Mansour, Permanent Observer of Palestine to the United Nations, wrote a letter to the UN Security Council about the “critical situation and continuously rising tensions in the Occupied State of Palestine” and called on the international community to give serious attention to the situation at the Al-Aqsa compound.

“Israel is attempting to create a new reality at the expense of the Palestinians, their religious rights, sites and historical identity and are violating the sanctity of religious sites without consequences,” he wrote.

“To remain silent in the face of such gross violations is unacceptable and will only bolster Israel’s impunity.”