Co-tenants of Mr. Ismaila Ladoja, who lives in one of the rooms of a 10-room apartment in Alagbado area of Lagos, have always suspected something unusual was going on between him and his 22-year-old daughter. 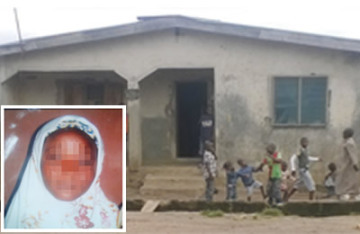 Punch reports that Ladoja, who is a bricklayer has always been in the microscopic eyes of other tenants because they all believe he sleeps with his first daughter, Ife, who is 22 years of age. Although no one wanted to bell the cat even when they saw signs that the little girl was bleeding, some of them however spoke with Punch anonymously.

The report which includes lots of accusations and counter accusations, is said to have involved many of the co-tenants confronting the bricklayer a number of times but his denial made many believe that it was truly a figment of their imaginations until they noticed the young girl’s tummy protruding which was followed by bleeding.

“We noticed over the last few months that Ife’s tummy was growing bigger. We knew something was wrong but one day, we noticed that she was bleeding,” a neighbor who spoke on condition of anonymity, said.

One of the occupants of the house alleged that Ladoja and the girl’s mother might have colluded to abort Ife’s pregnancy. Making it known why she thinks the mother of the young girl might be involved in the matter, the neighbor said:

“He beats his wife regularly. The woman dare not talk. In fact, when she was asked about it, she flatly denied the allegations. “Everybody in the compound knew what was going on. So, the girl was kept indoors for about a week. We noticed that she fainted a few times when she was kept at home. So, they rushed her to the hospital.

“We asked the man where he took the girl to but he said she had been taken to a hospital because she was ill but would not disclose where. How can we report to the police when we have not been able to catch him on top of his daughter?

“Sometimes, he would send his other children out of the house, and when we ask the children why, they tell us that their father is inside with their elder sister and had asked them to go play outside,” one of the tenants said.

Although the tenants have not been able to produce evidences to buttress their claims aside from the observations, It was made known that the man was accused of doing same where he was living before he moved to this present apartment he is living with his wife and 7 children.

When one of his former neighbors on 4, Ajibola Street was contacted,  the former tenant who like the rest, pleaded anonymity, alleged that Ladoja had been suspected to be sleeping with his daughter when he was living there for a long time before he moved to the present apartment.

“Do you expect the wife to tell you the truth? She is just a poor woman who is helpless and does not want to put her husband in trouble. He was always locked up with the girl while the other children stayed outside when we were living together. He always denied sleeping with the girl.“But the girl was always moody. She cried sometimes. When we asked what was wrong with her, she would never say it,” he said.

When Ladoja’s landlord, an elderly woman who identified herself as Mrs. Shorinolu, was contacted, she made it known that although she doesn’t stay in the house, but if he is found wanting, he should be arrested instantly to face the law. However, Mrs. Shorinolu’s daughter, a headmistress of a school, who also oversees the welfare of the house made it known that various reports reached her over the man’s actions which made her gave him a quit notice but all to no avail.

When Ife’s mother, who is also Ladoja’s wife was contacted, she denied the accusations saying she trusted her husband and that he cannot do anything like that. The 40-year-old woman said:


“We suffer so much and my husband labours day and night to put food on the table. We have seven children and have been using a one-room apartment since we got married 22 years ago. So, what do we have that anybody would envy to the extent of cooking up such allegation?

“It is a total lie that she fainted or was bleeding. She only had malaria which became really serious and we had to take her to someone who treated her.”

“I took her to a drug store owner, who gave her drips and few drugs. Ife currently lives with my mother. “How can someone sleep with his own child? Is it wrong to love one’s child unconditionally?”

The woman who began to cry, lamenting that she had no idea why her family was being victimized even though they were poor could not however give the contact of her daughter saying she needs to inform the girl first. She also claimed she does not know the phone number of her daughter. She also declined giving the address of where the girl was staying.

When Ladoja himself was later contacted, Ladoja explained that he had no idea why anybody would think he would do such a thing to his child.

“Why would I as a Yoruba man do such a thing to my adult child? May God punish those people who have been saying those bad things about me. They simply hate me,” he said.

Asked why he took his daughter to hospital and why she was bleeding, the bricklayer said, “She simply had malaria. Truly, we had kept her indoors for some days. It is just another lie by my neighbours that she was bleeding.“After some days and her situation deteriorated, we rushed her to the hospital. We had given her drug for her malaria but it did not seem to work.”

Ladoja who said he could not remember the name of the hospital where her daughter is receiving treatment said:

“God will bless you for calling me. I am really happy you want to publish this because the world needs to understand the lie this people have been spreading about me. Did anyone of them catch me red-handed sleeping with my daughter?”