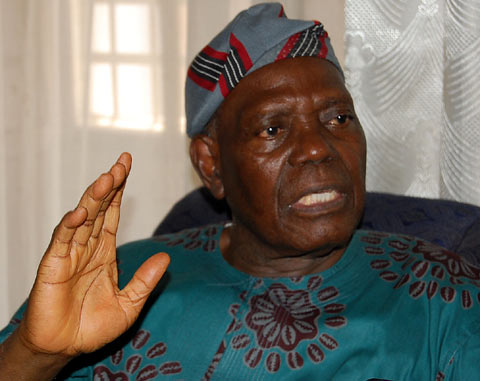 A former governor of Osun State and former Interim National Chairman of the All Progressives Congress, APC, Chief Bisi Akande, on Wednesday, warned that the nation is drifting speedily towards despotism and lawlessness under the watch of President Goodluck Jonathan.

Akande, therefore, urged Nigerians to rise up and resist the spate of impunity and power tyranny unfolding in the country.

He spoke in Abeokuta, Ogun State, while making his remarks as Chairman at the inaugural lecture of Dauda Adegbenro Foundation.

The lecture was held in memory of late former premier of the Western Region, Chief Dauda Adegbenro.

The APC chieftain, who noted that President Jonathan has been fanning the embers of division along religious and ethnic lines in the country via propaganda, also accused him of persecuting the Yorubas as well as using impunity to impose leaders on Southwest states of Nigeria.

According to Akande: “we are back to the similar era of impunity in Jonathan’s federal government. The government imposes unwanted individuals as leaders in each of the states of Yoruba land.”

“Apart from marginalising the Yorubas in all appointments of his government, Jonathan’s trait has always been to persecute the Yoruba leaders who he perceived to have contrary views to his own.

“Jonathan’s first and most significant act of ingratitude to the Yorubas was when he maliciously arrested and prosecuted unjustifiably Dimeji Bankole and Senator Bola Tinubu.

“No government has ever disrespected the Yoruba like the Jonathan’s administration. But it is yet over because few of us with our followers have resolved to continue the struggle for a just and democratic Nigeria. More importantly, though for a Yoruba nation that can stand up against discrimination, nepotism and power tyranny.

“His other acts of ingratitude include divisive propaganda to cause disaffection among various ethnic nationalities and religious divides with a view to undermine the security of Nigeria”.

The ex-governor also accused the president of working against the formation of APC, saying he made the party registration a difficult task.