For the second time in three months, Nigeria has escaped a lengthy ban from world football governing body, FIFA.

According to latest reports, a court case against Nigeria’s football association that threatened to earn the country a lengthy suspension from FIFA has been withdrawn.

This detail was announced on Thursday, 30 October, 2014 by lawyers handling the court case filed by Chris Giwa, ousted head of the Nigeria Football Federation, NFF. 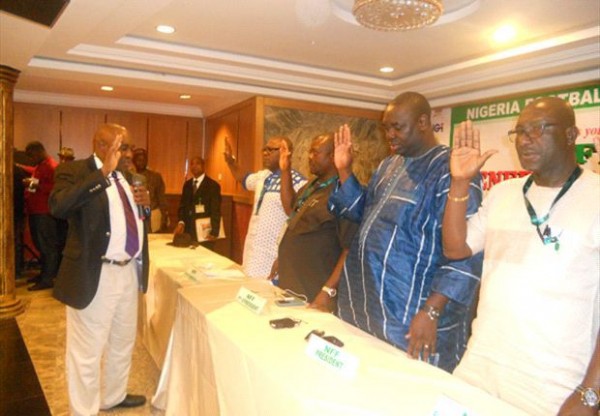 It would be recalled that FIFA had threatened to suspend Nigeria from all its football related activities if the NFF did not resolve the crisis rocking the football house.

A judge in Jos had last week ruled that the appointment of a new president, Amaju Pinnick, and executive committee should be set aside.

However, reports have emerged that Giwa had now withdrawn his complaint.

“I have struck out the matter… The suit ceases to have life,” said judge Ambrose Allagoa.

Commenting on the matter, Giwa’s lawyer, Habila Ardzard, said the decision was made “as a result of pleas from so many well-meaning Nigerians and in the national interest”.

Joshua Onoja, representing the NFF, also confirmed that the case had been discontinued.

FIFA had given African champions Nigeria until midday on Friday to overturn the court ruling and reinstate Pinnick or face a ban from international competition.

The governing body had told the NFF that it statutes prevent football issues being heard in a civil court.

FIFA has in recent months repeatedly warned Nigeria that it faced sanctions over the running of the NFF and its handling of elections to appoint a new president and executive committee.

Reports surfaced on Wednesday night that President Goodluck Jonathan had urged the NFF to resolve the crises rocking the football house in the interest of football loving Nigerians.

It was reported on Tuesday that the president of Nigerian Senate, David Mark, had urged the NFF to fix the crisis rocking the football house in the interest of football loving Nigerians.

It would be recalled that Nigeria have been banned twice this year for government interference in the NFF.

FIFA had also warned the country in September and again in October that another incident would result in a lengthy ban.