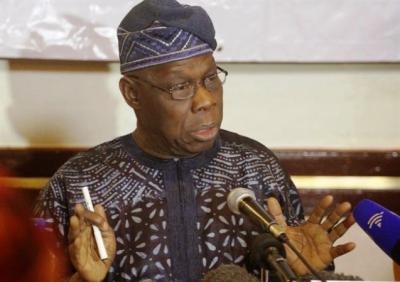 Former President Olusegun Obasanjo has denied reports that he has endorsed an aspirant jostling for the office of the president in the February 2015 election.

Speaking through one of his associates, Chief Oyewole Fasawe, in Abeokuta, the Ogun State capital on Monday, the ex-president said he had neither endorsed nor undermined the chances of any of the aspirants running on the platform of any of the political parties.

He was reacting to media speculations that he specifically warned a national leader of the All Progressives Congress, APC, Asiwaju Bola Tinubu, who paid him a visit in his Abeokuta residence last weekend, against fielding an “unclean vessel” in apparent reference to Alhaji Atiku Abubakar, who was his (Obasanjo) deputy from 1999-2007, as the opposition party’s presidential candidate in 2015.

Atiku had last month formally announced his intention to seek the presidential ticket of the APC and yesterday, picked the presidential and expression of interest forms of the opposition party.

Another leader of the APC and former head of state, Gen. Muhammadu Buhari (retd), who served as petroleum minister under Obasanjo in the 70s, will also formally announce his plan to contest the presidential election on Wednesday, while the ruling Peoples’ Democratic Party, PDP, has since adopted President Goodluck Jonathan as its sole candidate.

Mr. Fasawe said in a statement that the ex-president sees the current political gladiators in all the parties as his political children and associates, hence, he would not endorse one over the other no matter the amount of pressure from any quarter.

“Baba has not endorsed anyone and has not condemned anyone. A statesman of his stature and pedigree can only pray and work towards peace and progress in Nigeria, Africa and the world at large. Those trying to exploit his friendliness to gain political advantage over other contenders are being unfair and doing so without Obasanjo’s approval”, he said.

Fasawe noted that Chief Obasanjo had been working tirelessly behind the scene to ensure a secure and rancour-free atmosphere for free and fair elections in 2015 devoid of blood-letting and wanton destruction of lives and property.