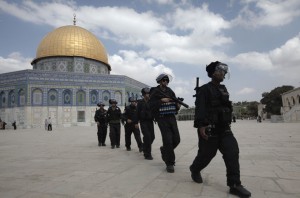 A group of demonstrators from Palestinian have clashed with Israeli police at the al-Aqsa mosque compound in occupied East Jerusalem, leaving three officers lightly injured, according to police.

Sources say that Palestinian worshipers on Wednesday morning were not allowed into the mosque by Israeli police, who then escorted members of a right-wing Jewish group into the mosque to observe a Jewish holiday.

Tyab said that the clashes began after the Jewish group were given permission to enter the compound.

Police chased the demonstrators towards the mosque, where they barricaded themselves inside and continued hurling objects in the direction of the police, said Samri.

She said that at least one Molotov cocktail was thrown at the police, but that it failed to ignite.

There was no immediate information on whether anyone was hurt among the Palestinian protesters.

“It underscores the tensions at the mosque compound, particularly around this time of the year,” said Tyab.

“We’re in what’s described as the ‘High Jewish holidays’ – or Sukkot – when many Jews will go to the old city to offer their prayers at what they believe is their temple.”

The mosque, known to Jews as “Temple Mount” is the holiest site in Judaism and the third holiest in Islam, and is a frequent flash-point for demonstrations.

An Israeli Tourism Ministry decision earlier this week to expand the entrance to the mosque was condemned by Palestinian officials as a unilateral change in the status of the sensitive holy site.

Tensions have been high in Jerusalem since three Israeli teenage settlers went missing, and were later found dead, in what Israel says was an abduction and killing by Hamas fighters, followed by an apparent revenge attack on a young Palestinian male several weeks later.

Those events helped precipitate Israel’s 50-day-long offensive against Gaza that killed more than 2,100 Palestinians and 72 on the Israeli side, including six civilians.

The military offensive, dubbed by Israel as “Operation Protective Edge,” ended in a truce on August 26.