The ruling Peoples Democratic Party (PDP) governors and national leaders of the party have reportedly clashed over the stoppage of consensus endorsement of their candidature and others in their states for the 2015 election. 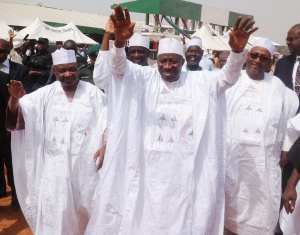 The aggrieved governors on Friday kicked against the party’s National Working Committee (NWC) decision to stop them from further endorsing candidates that would succeed them after their tenures elapses, The Nation reports.

Meanwhile, the annulment of such endorsement would have affected candidates like the Senate President, David Mark, who is eyeing the fifth term in office, Senate Leader, Victor Ndoma-Egba (SAN), some outgoing governors already marked for the Senate like Governor Godswill Akpabio of Akwa Ibom state;  Benue state Governor, Gabriel Suswam, Governor Emmanuel Uduaghan of Delta state, Governor Saidu Dakingari of Kebbi state, Governor Theodore Orji of Abia state, Governor Sullivan Chime of Enugu state, Governor Ibrahim Shema of Katsina state, Governor Babangida Aliyu of Niger state as well as Governor Isa Yuguda of Bauchi state.It would be recalled that on Thursday, Prof. Wale Oladipo, the National Secretary of the party in a statement declared null and void the endorsement of governorship, senatorial and other candidates by the governors and state chapters of the party. It ordered the states chairmen and governors to stop such endorsements.

Others affected by the NWC’s decision are those seeking second term in office like Governor Ramalan Yero of Kaduna state, the Acting Governor of Taraba State, Garba Umar; Governor Ibrahim Dankwambo of Gombe state; Governor Henry Seriake-Dickson of Bayelsa state, among others, while those whose governorship endorsements have been cancelled are Emmanuel Ugwuanyi (Enugu); the Minister of Health, Prof. Onyebuchi Chukwu (Ebonyi); former Minister of State for Health, Dr. Ali Pate (Bauchi).

It was gathered that the governors expressed shock that the PDP’s NWC could issue a directive like that, after making them support the sole endorsement of President Jonathan for second term in office.

“We have discussed among ourselves, such a cancellation of endorsements by the NWC is unacceptable to us. Whatever is good for the goose is good for the gander. If the NWC means business, the ban on endorsements should be across the board. We cannot be used and dumped by anybody or group. Why are they changing the game now?” one of the governors said.

“Such a ban will spell doom for the party. The National Headquarters should not dabble in what is happening at the state. Are they just realising that endorsement is not good for our democracy? Look, endorsement or consensus-building is part of the game too,” another governor said.

However, it was gathered that some of the governors were already talking party leaders as at the time of filing this report.

A top party leader assured that nobody is been targeted but the party do not want endorsement abused in such a way that it will erode democratic process, and promised that the issue would be ironed out.

It would be recalled that the ruling Peoples Democratic Party, PDP, National Working Committee, NWC, recently issued a warning to all its state chapters, after President Jonathan has ben adopted as its sole candidate in the 2015 presidential election.

Meanwhile, the leadership of the Peoples Democratic Party (PDP) has begged the former President of Nigeria, Olusegun Obasanjo, for forgiveness.