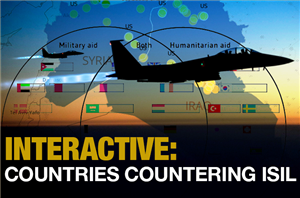 Ground offensives by the Iraqi army and Kurdish forces, backed by a barrage of US air raids, have forced ISIL fighters from several key towns in the north and south of Iraq, officials said.

Kurdish peshmerga forces said on Saturday they had recaptured several towns and villages held by the ISIL in northern Iraq, while Iraqi government forces claimed to have retaken the town of Jurf al-Sakhr, 50km to the south of Baghdad.

The ground forces were backed by 22 air strikes by US-led forces over Friday and Saturday, the US central command said, which targeted ISIL forces in Mosul in the north, Fallujah in the western Anbar province, and the oil-rich area around Baiji.

A Kurdish intelligence officer told the Reuters news agency that his forces launched their advance on Zumar, near Mosul, from five directions in the early morning after air strikes struck ISIL positions. Iraqi state TV said at least 50 ISIL fighters were killed and 10 vehicles destroyed in the raids.

Peshmerga said they encountered fierce resistance, and a car bomb attack had killed seven of their fighters. Zumar was one of the first Kurdish-controlled towns that fell to ISIL in August.

Iraqi government forces meanwhile, said they were in control of Jurf al-Sakhar, a key town in Babel province on the road from Anbar to Baghdad and the Shia towns of Najaf and Karbala.

“We have managed to push out Islamic State terrorists from the town of Jurf al-Sakhar today and now we are raising the Iraqi flag over the government offices,” provincial governor Sadiq Madloul was quoted as saying.

Iraqi state TV added that the sappers have cleared more than 300 IEDs left behind by ISIL fighters.

The operation comes weeks before Ashoura, when Shias mourn the death of Imam Hussein. Hundreds of thousands of pilgrims travel to Karbala, the home of the imam’s shrine.

Officials said eight Iraqi soldiers were killed battling ISIL as they attempted to secure the area. On Friday, the Iraqi army said about 100 ISIL fighters had surrendered to their soldiers in the area.