Photos: Man Forces Neigbour To Eat His Feaces In Lagos

A 26-year old man, Paul Adelakun has been arrested by the police at Ikotun division for attacking his neighbour, Victor Torlowei who he forced to eat his feaces in Lagos. 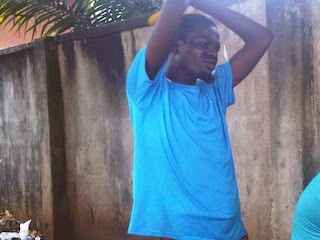 According to PMNEWS, Torlowei who lives at 7 Ilupeju street, Pako Bus Stop, Ikotun had had a disagreement with Adelakun’s elder brother before he decided to answer nature’s call. While he was at it, Adelakun forcefully opened the door of the toilet and at the same time gave him a set of  blows continuously, forcing him to put the faeces he had defecated on the floor into his mouth.

According to Torlowei, when he attempted to resist eating the faeces, Adelakun used a broken bottle to stab him on some parts of the body. It took the intervention of neighbours who rushed to the toilet to rescue him. He said before then, he was bleeding and that his feaces was smelling in his mouth, adding that, it led to many injuries.

However, Adelakun said he was angered by Torlowei’s action. He however denied that he forced him to eat his feaces and said if he actually ate it, it could have been when the duo were struggling in the toilet.

Adelakun was  charged before Magistrate’s court Ejigbo with conduct likely to cause breach of public peace and assault under the Criminal code. When Adelakun was arraigned, he pleaded not guilty. The presiding Magistrate, Mr. P.E. Nwaka granted him bail in the sum of N20,000 with one surety in like sum. He was remanded in prison custody at Kirikiri pending when he will perfect his bail condition.

It would be recalled that just recently, a man, Mr. Ismaila Ladoja who lives in one of the rooms of a 10-room apartment in Alagbado area of Lagos was said to be having something unusual was going on between him and his 22-year-old daughter.