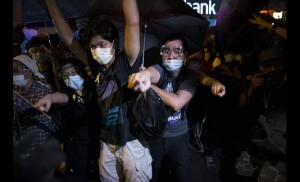 Hong Kong police have clashed with pro-democracy protesters after the forced clearing of a protest site brought more activists to the streets.

Police used pepper spray and batons to fend off large crowds of people who had gathered in the commercial district of Mong Kok on Friday, with reports of several protesters knocked to the ground in the violence.

A reporter reporting from Hong Kong, said attempts by police to clear protest sites was having the opposite effect.

“They managed to throw out dozens of sleeping people and their belongings to open the roads in Mong Kok, but by evening thousands of people gathered back.

Many of the demonstrators had crossed Victoria harbor from the movement’s main base in Admiralty, encouraged by speeches from protest leaders to defend Mong Kok.

An estimated 800 riot police were involved in the early morning attempt to clear Mong Kok. Many protesters camping there were caught by surprise and retreated without resistance.

“The Hong Kong government’s despicable clearance here will cause another wave of citizen protests,” activist Wong Yeung-tat had told the Reuters news agency after the operation.

Meanwhile student protest leaders were calling for talks with Hong Kong’s government by Wednesday, instead of the originally scheduled date of Saturday.

However that many protesters felt the talks would be futile, as the chief executive, Leung Chun-ying, has already said their demands are impossible.

Activists are calling for fully free elections to decide the territory’s next chief executive in 2017. Beijing however has said it would only allow those it pre-approves to stand for elections.