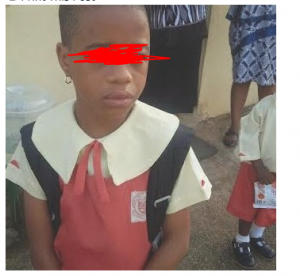 A little girl identified as Blessing Osayande who is a primary 2 pupil of South Royal School in Benin city had been allegedly battered by a woman believed to be her father’s lover.

She was seen in school on Thursday, October 23, 2014, with a broken head which she claimed was inflicted on her by her father’s girlfriend who hit her head against a table.

The school authorities of South Royal School disclosed that Osayande had been suffering serious abuse from her acclaimed father’s lover and out of concern, they have called the father on several occasions to caution his girlfriend but it all seems futile.

The welfare office in Benin has since taken up the case but they still wanted the public to be aware. They didn’t give the lover’s name or photo.