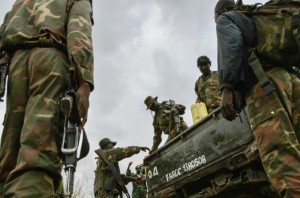 Congolese ex-militia leader Mathieu Ngudjolo Chui has protested his innocence at an appeal hearing before the International Criminal Court, where he was acquitted nearly two years ago of war crimes charges.

“From the beginning I pleaded not guilty. I never planned the attack on Bogoro,” Ngudjolo told the ICC appeals chamber on Tuesday.

Ngudjolo, 44, is a former leader of the Nationalist Integrationist Front (FNI) militia in eastern Democratic Republic of Congo and his acquittal in December 2012 was a first for the world’s only permanent war crimes tribunal.

Judges said at the time that prosecutors had failed to prove his commanding role in a 2003 attack by ethnic Lendu forces on Bogoro village in the vast African country’s northeast Ituri province, in which more than 200 villagers were slaughtered.

Ngudjolo had faced charges including using child soldiers in the horrific ethnically-motivated attack.

Many victims of the opposing Hema group were burnt alive, and babies were smashed against walls while women were raped and abducted as sex slaves.

The ex-militia chief was back in court on Tuesday after prosecutors appealed the 2012 decision by the ICC judges.

A prosecutor called the decision to free Ngudjolo a “miscarriage of justice”.

Judges had not properly evaluated the evidence presented and analysed it “piecemeal without making the connections,” said prosecutor Fabricio Guariglia.

In 2012, judges had found that three key prosecution witnesses were not credible and that prosecutors failed to prove Ngudjolo’s role in the attack.

A deserter from the former Zaire army (FAZ) in 1996, Ngudjolo later became a leader of the Lendu-based FNI and “had ultimate control over FNI commanders”, prosecutors alleged.

His fellow defendant Germain Katanga was sentenced to 12 years for his role in the Bogoro attack after judges split their trials.

Their main adversary, former militia leader Thomas Lubanga, was in 2012 jailed by the ICC for 14 years for using child soldiers in his own rebel army.

In 2003, DR Congo was just starting to emerge from a war that had embroiled the armies of a half-dozen nations, and the isolated east was rife with violent militia groups.

Clashes in Ituri broke out in 1999 including between the pastoralist Hema and the agriculturalist Lendu, devastating the region and leaving about 60,000 dead, according to NGO tallies.