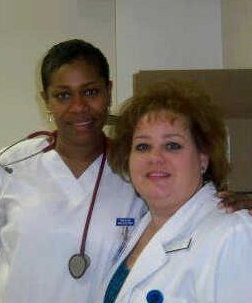 Former Nigerian Beauty Queen and actress, Regina Askia has volunteered to be among the few nurses who are ready to fight Ebola in the States. Regina wrote on her Facebook page not most of her colleagues (nurses) were not willing to take up the challenge and those who were ready demanded a sum of $200 per hour. But she went forward and volunteered herself for free. Interestingly, she is the only female at the hospital she works that volunteered. Bless her and may she not contract the virus during her fight in battling it.

“My job was looking for Nurses to volunteer for the Ebola center which was moved from our building to another location. My male colleagues said they would do it for 200 dollars per hour, ….C’mon Regina , gotta get on the team…they said. I was not smiling (I am captain of my 3 kid team). Not one female nurse volunteered (lol). We ALL had to demonstrate proper use of PPE equipment and be proficient with the Ebola protocol. I was full of thoughts as I watched the display, hoods, masks, gowns, boots….almost like a nightmare. Home news had it that Nigerians washed their hands, didn’t hug as much, monitored their temps and on the first signs of malaise drank the ORT (oral rehydration therapy) until symptoms passed. Were we once again trying to kill mosquitoes with bazookas? I wasn’t going to wait to find out. In a daze I got with the program to become “an Ebola ready Nurse”. More power to all the nurses on the grind – Goodluck!!”