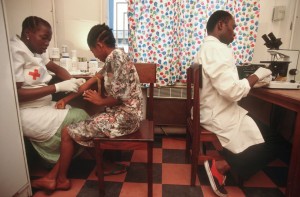 Why does it seem like every dreadful disease seems to have emerged from The Congo or at least from West Africa.

The global HIV pandemic started in the 1920s in Kinshasa, capital of what is now the Democratic Republic of Congo, according to a study published by the journal Science.

HIV is known to have been transmitted from primates and apes to humans at least 13 times, probably through the hunting or handling of bush meat, according to researchers from Oxford University, who participated in the study.

But only one of those transmissions led to the human pandemic that has infected almost 75 million people, the university said in a press release.

In the 1920s, when Congo was still under Belgian colonial rule, the city of Kinshasa was expanding rapidly.

Factors such as good transport links and a booming sex trade – supported by an influx of male labourers – favoured its transmission.

More than 1 million people were travelling through the city on railways annually by the late 1940s, taking the virus to other regions.

Meanwhile, public health initiatives against other diseases led to the unsafe use of needles, possibly contributing to turning HIV into a full-blown epidemic, according to the study.

“It seems a combination of factors in Kinshasa in the early 20th century created a `perfect storm’ for the emergence of HIV, leading to a generalised epidemic with unstoppable momentum that unrolled across sub-Saharan Africa,” said Oliver Pybus, of Oxford University’s department of zoology.