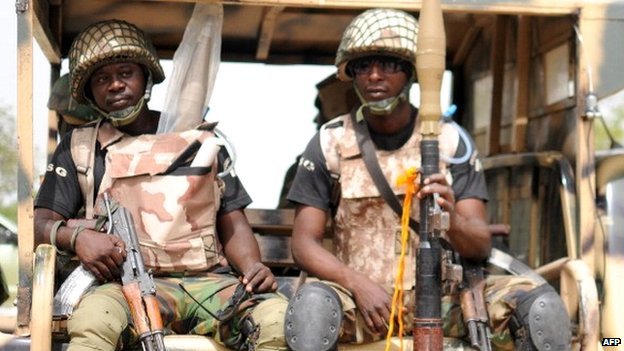 Strong indications emerged yesterday that the Nigerian Military have crushed the Boko Haram sect and liberated Michika and Gulak in Madagali Local Government of Adamawa State from the insurgents’ stranglehold.

The two towns had been under the control of the insurgents since early last month.

It was learnt that the security forces over ran the insurgents and took control of the towns following intense battle.

According to a source, “I can confirm to you authoritatively that the military are advancing towards Madagali after taking over Michika and Gulak”.

The source, who spoke from Michika, on Monday, noted that despite the military advancement, the insurgents tried to regroup at the Government Technical College, Michika on Sunday night but were again dislodged by troops.

The development was confirmed by the Adamawa State Acting Governor, Ahmadu Umaru Fintiri, who praised the Nigerian military for their gallantry.

Fintiri, in a statement by his Chief Press Secretary, Mr. Solomon Kumangar, said the liberation of Michika and the other towns was a welcome development.

Reports indicated that about 200 insurgents had been killed in the latest offensive as Boko Haram insurgents were forced to beat a retreat when troops routed them from Michika town.

“The Nigerian troops have gained entry into Michika and Gulak and are now fully in control of the towns after they dealt a severe blow to the insurgents, who lost about 200 members while some escaped with gunshot injuries”, the source said.

He added that the insurgents entered through Uba and attacked the Nigerian troops who had already advanced into Michika but were repelled.

“The gallant Nigerian soldiers were attacked from behind by the militants but the soldiers engaged them in a fierce battle for over five hours and eventually overpowered them”, the source said