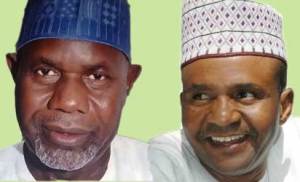 The senator said Suntai was being shielded from Umar for security reasons, adding that various unpleasant actions of the acting governor since his boss’ involvement in a plane crash two years ago, called for suspicion.

Speaking with journalists in Abuja, Bwacha said the acting governor’s actions were enough proof that he was not favourably disposed to seeing the governor resume office, hence, the decision of those concerned about Suntai to keep him away from his deputy.

He said, “If we have empirical evidence that you are working towards sacking your principal and from all available facts, if you want him sacked and you are not able to achieve that, now suspicion will begin to emerge that other extra-ordinary means could be used.

“That is why for security reasons, nobody would even allow you to see him”.

The senator also accused the acting governor of being too desperate for power, and wondered why he was scheming to replace the governor when he was not on the ticket that brought Suntai into office as governor for a second term in 2011.

Bwacha, who betrayed his emotions during the brief interview, said the wrath of God was awaiting the acting governor over his alleged evil plans against Suntai.

“This is somebody who brought you from the dustbin and then you decided that you want to oust him. So our belief is that God is waiting for him somewhere”.

Bwacha further alleged that the acting governor was unnecessarily heating the political atmosphere in Taraba as a result of his quest to become the substantive governor.

He said, “The deputy governor wasn’t actually part of the election but was brought in midway as the deputy governor of the state but he has decided to throw morality into the dustbin. That is actually the cause of the political problem in the state.

“Simply put, the problem is from the deputy governor that wants to remove his principal who for no fault of his, had an accident.

“When he had this accident, it was just barely two weeks after he was sworn in as deputy governor but he decided to put machinery in place to oust his principal who was lying in the hospital.

“People throw morality to the dustbin. People should learn to live like human beings and not to behave like animals that are in desperate search to consume others”.

Bwacha challenged people asking whether the governor was fit to return to office to look at the situation from a moral rather than mental point of view.

“The question here is not about whether somebody is fit to rule or not but the question of morality. Somebody who is morally upright should be thinking about the question that ‘did this man choose on his own to be in this situation?” He added.