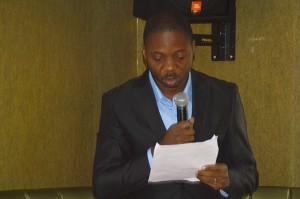 The controversy trailing the recently-held 7th edition of the Best of Nollywood (BON Awards) at the River State Government House in Port Harcourt, is reaching its climax.

News of the alleged maltreatment of Nollywood stars at the event is spreading like wild fire and fingers have been pointed in the direction of Nollywood actor and producer, Elvis Chuks as the mastermind of the controversy.

Organiser of the awards ceremony, Seun Oloketuyi has responded to the allegations, taking well-aimed shots at Elvis Chuks, a Nollywood actor and producer of movies like Caught In The Act, A Wish and others said to be responsible for the saga and blogger, Linda Ikeji See Oloketuyi’s message below: –

Dear all, I want to use this opportunity to thank the over 200 guests who flew to Port Harcourt, Rivers State, from all over Nigeria to witness the 2014 BON Awards and to say thank you to Governor Amaechi for his love for the arts and Nollywood.

However, the events of the last 24hrs have come as a shock to me and what keeps ringing in my head is why? Though there is an official press release to debunk the misinformation on Linda Ikeji’s blog, this message is to address the issue of fiends masquerading as friends.

Elvis Chuks is supposed to be my friend. He was one of the few Nollywood guys who sent me a birthday present this year. He has direct access to me and he is an integral part of another project I am involved in.

Elvis was in PH as a nominee and was accorded the same courtesies as other celebrities. You can therefore imagine my shock to discover that he is not just the source of Linda Ikeji’s fallacy, he has been sending broadcasts that Mama G and Liz Benson walked from the Government House gate to the banquet hall. He lied. I rode in the bus that took them, Yinka Quadri and Sola Sobowale to the venue. They are alive and checks could be made.

My friend also complained of not getting food and drink at the event. Yes, because we were not having an owambe. Lunch and dinner were provided buffet-style at the various hotels. Besides, I have never seen an international awards show where food is served. I pity Elvis really because BON Awards is an idea inspired by God and no amount of negative campaign can bring it down.

On Linda’s post, it is scary that we chatted and exchanged mails at 9am when she made enquiries about the event pictures only for her to post her lies as (usual) without asking for our side of the story. Yet, this is somebody I call my friend and who can reach me anytime. If Linda thinks she is invincible and could therefore bring other people down, let her be reminded of the fall of Sani Abacha and Ghadaffi.