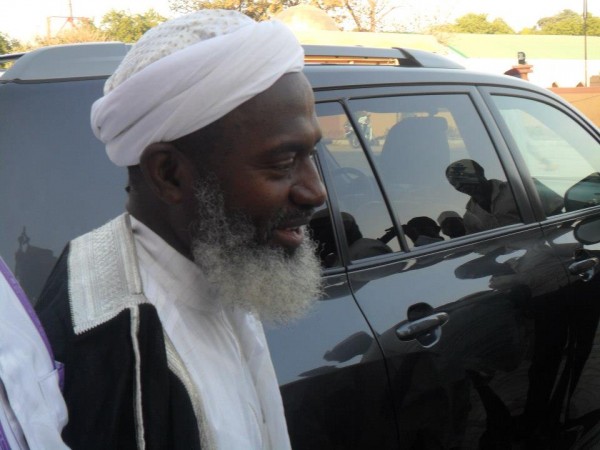 The Islamic cleric who revealed that he has never met the President despite the fact that they were both given birth to in Nigeria, reiterated that what is imperative for us all is the legacy we leave behind after we have departed the world.

Gumi, however, advised Mr. President that Nigerians would not want a burnt country with hundreds of thousands dead, maimed or displaced people because of the thoughtlessness and recklessness of its leader.

He described Nigeria of today as a single railway line with two heavily loaded trains speeding towards each other in opposite direction, saying President Jonathan is the driver of the heavier train and urged him not to think that even a cart on the railway cannot derail him with great catastrophe to humanity.

MY CANDID ADVICE TO PRESIDENT GOODLUCK

We have never met despite the fact that we were all born and we lived for more than half a century in this great vast country Nigeria. It’s here we all grew up and were educated and I presume except by divine prudence it’s here that we will all be buried.

So what truly matters is the legacy that we will bequest our children and the next generation of Nigerians to come. We will not want it a burnt country with hundreds of thousands dead, maimed or displaced people because of the thoughtlessness and recklessness of its stewardship.

Nigeria today is a single railway line with two heavily loaded trains spending towards each other in opposite direction.

You’re the driver of the heavier train and please do not think that even a cart on the railway cannot derail you with great catastrophe to humanity.

You need to come out of the cocoon and face the reality. Denial of the truth can never solve problems.

Mr. President, from what I heard from people who are close to you, is that you are humble with a soft heart. But still humility is never enough for an effective leadership. Leadership is about listening and taking the good advices from people of wisdom not from those that benefit from you or have any agenda other than the unity and progress of this Nation.

The mantle of the leadership of this country was given to you under oath. Almost four years ago you swore to protect ‘the interest of the sovereignty, integrity, solidarity, well-being and prosperity of the Federal Republic of Nigeria’. You said: ‘ I will not allow my personal interest to influence my official conduct or my official decisions; and ‘I will do right to all manner of people, according to law, without fear or favour, affection or ill-will’

Unfortunately, many people including me before God believe you broke some of your oath. I’ll only need to refer you back to the honest open letter advice you were given by your political godfather. You appear more Ijaw than Nigerian. It’s seldom fathers will deceive their children. Yet you never listen. And sadly by your recalcitrance you are dangerously leading this nation to chaos and turmoil that only God knows were it will end.

Muslims have officially registered to you on occasions your partiality. Northern groups have complained about your bias. The youth about your neglect.

You have divided the nation gravelly on the religious divided. Already we heard a call in a church that you are now a savior. Now, not of Nigeria but the church in Nigeria. With this religious zeal on both sides, each side looking at the wrong people for salvation the nation is heading towards disaster.

My fellow country man, it’s unfortunate that your stand on many issues have made you into a polarizing figure while the exalted office you occupy needs a nationalistic one. Surely with the Christian votes and northern PDP followers you can win another election but you will also set the nation into another turmoil because that segment of the nation that rejects you do so because they believe rightly or wrongly you are involved negatively in the Boko Haram Saga. The natural thing any good leader will do in this situation is to step down for a person all the segments of the nation will have confidence with for their well-being. A credible person that will not stir apprehension. The decision is not about your rights but about responsibility.

Therefore as you pray in the Holy Land seek for God’s indulgence to show you the light of honor and do the right thing. It’s God’s command that Nigeria stay united and ‘what therefore God hath joined together, let not man put asunder’.

A word of wisdom says: ‘He who consults is never disappointed and he who seeks God’s choice never regret’ so please don’t brush it aside call men of wisdom to advice you too.

I for a start, I am hereby candidly advising you to relinquish your presidential ambition because of peace, stability and well being of millions of innocent Nigerians. There are many politicians that can ‘finish’ it on your behalf. The PDP can present Akpabio or Obi or Orji etc.

I rest my case here.

Meanwhile, Sheikh Ahmad Gumi, has also expressed his opinion on Buhari’s intention to run against President Goodluck Jonathan in the upcoming elections.