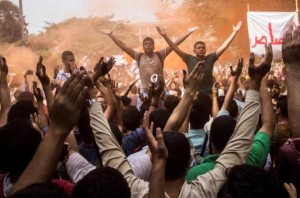 Protesters in the coastal city of Alexandria set fire at the entrance of their university’s literature school on Monday.

In Cairo, security forces stormed al-Azhar University for a second day and arrested several students who were taking part in a sit-in on campus, witnesses told Al Jazeera.

The demonstrations, directed against what students describe as repressive university policies and the 2013 toppling of the elected Muslim Brotherhood-led government, coincided with the start of the academic year.

On Sunday, student protesters smashed a number of metal detectors that were recently installed as a part of intensified security measures to prevent any resurgence of demonstrations in support of the former president, Mohamed Morsi, who was overthrown by the military.

Last year, at least 16 students were killed and hundreds were arrested during university protests that regularly descended into violence.

This year, government officials have warned that protests in universities will not be tolerated.

“Security forces, and in coordination with the administration of these universities, have been stationed outside the walls of universities to deal with student outlaws,” Interior Ministry spokesperson Hani Abdel-Latif told local media.

Authorities have hired a private security firm to search students and installed metal detectors and cameras around campuses. New fortified walls were built and troops were permanently deployed outside campuses.