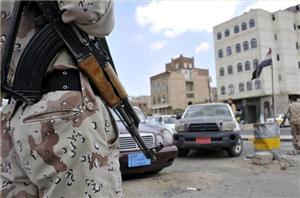 Tribesmen and Shia Houthi fighters have signed an agreement that could end hostilities in Yemen’s Ibb province, after renewed fighting breached a day-long ceasefire pact.

The second ceasefire, which was signed on Saturday, states as a condition the safe withdrawal of all Houthi fighters from Ibb.

A 24-hour ceasefire agreement between the warring sides was reached on Friday, interrupted by the death of at least 20 people in fighting on Saturday. Violence erupted when tribesmen set up a checkpoint in Yareem town to prevent the Houthis from entering the provincial capital of Ibb.

The Houthis, who took over the capital Sanaa on September 21, and who have held the strategic southern port of Hudaydah since Tuesday, did not face any opposition from local authorities as they entered the provinces of Dhamar and Ibb and set up checkpoints, officials said.The city of Ibb, 150km south of Sanaa, borders Bayda province, a stronghold of al-Qaeda in the Arabian Peninsula (AQAP), where Houthis have clashed repeatedly with al-Qaeda linked fighters since Tuesday.

The Houthi advance has increased fears of outright sectarian warfare in the north and, in a separate sign of the fragility of Yemen’s embattled state, southern separatists seeking to split from the north set an ultimatum for the government to evacuate its soldiers and civil servants by November 30.

A reporter reporting from Sanaa, said that due to the rebels making new gains every day and the secessionist movement in the south, there was “utter chaos in every corner of the country”.

The Houthis, who hail from the northern highlands and champion the interests of the Zaidi community which make up one fifth of Yemen’s 25 million population, are increasingly imposing their authority outside the capital as well as in it.

The group wants the northern part of the country to be one region instead of three and are also seeking a bigger say in drafting the constitution.

Separately on Saturday, a senior adviser to Iran’s Ayatollah Ali Khamenei, confirmed that Tehran is backing the Houthis.

Ali Akbar Velayati, who regularly speaks on behalf of the supreme leader, said Iran “supports the rightful struggles of Ansarullah [Houthis] in Yemen and considers this movement as part of the successful Islamic Awakening movements”.

He made the comments in a meeting with a group of Yemeni clerics in Tehran on Saturday, according to Iranian Press TV.