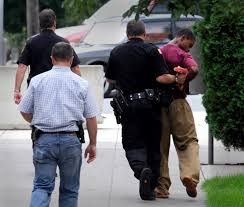 The gruesome crime took place on the 25th of September around 4:55 am, Samuel Higgins dropkicked 88-year-old Arthur Hearn to the ground and emptied his pockets while a beautician he was with stook there and watch in the 85oo block of South Cottage Grove Avenue, according to the Chicago Police Department. Arthur Hearn, 88, was immediately taken to Stroger Hospital in critical condition, police said, but he died as a result of the injuries that took place on the 25th of September.

Arthur Hearn, of the 8400 block of South Langley Avenue, was pronounced dead from cranial cerebral injuries at 5:50 pm, according to the Cook County Medical Examiner’s Office. His death was ruled a homicide. When the police arrested Samuel Higgins and started to question him he allegedly rolled his eyes.

A social media commentator by the name of Bobby Smith stated, “I’d like to see them hang him after the trial, but criminals have more rights than victims and their families. Chances are, he will be warehoused, at least hopefully for life, but one never knows. Let’s hope they don’t offer him a plea bargain deal. That is never in the interest of the victims, it shows how much the system really cares about justice. Why isn’t the girl that acted as a look out being charged with him? She should be.”

A Chicago Police Officer allegedly asked Samuel Higgins why he felt the need to rob and kill an 88-year-old man. Samuel Higgins, allegedly responded and told the police officer, “I didn’t try to kill him, but I needed to rob him for his money because I’m trying to save enough money to purchase a vagina.”