Pastor T.B. Joshua has disclosed that he had a vision of the tragedy which rocked his church on September 12. 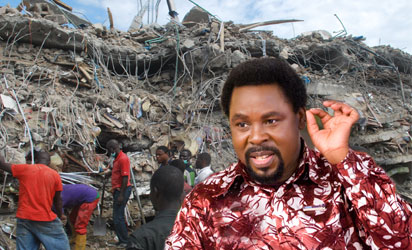 A building belonging to the Synagogue Church of All Nations (SCOAN) suddenly collapsed, leaving more than hundred people dead and many injured.

There have been a lot of allegations and discussions regarding the incident. The main controversy is connected with the cause of fall. Some believe that it happened because of the unapproved reconstruction of a building, while the church insists it was a terror attack.

The investigation is reportedly ongoing.

Days later, the embattled cleric and the church founder, allegedly famous both in Nigeria and abroad for his prophecies and healing powers, stepped out with another statement about the incident.

Punch reports with reference to Joshua’s message that the pastor knew something terrible would happen in the ministry and explained to his congregation how to behave to handle the tragedy.

In a statement posted September 28 on his official Facebook page, the cleric turned to his haters who blasted him for failing to predict the disaster:

“For the three weeks before the incident, if you heard my message and sat down, you would know I was giving you a vision and prophetic Word on how to handle the situation at hand. Trials and tests are meant for our belief. I go by the directives of God.”

He urged those who apparently turned against him to return to the Godly path.

“Don’t allow yourself to be used by satan. If you do, satan will use his people to run to you and disturb you the more. This is an opportunity for them to disturb your faith with their negative words.”

Joshua once again warned the critics and their families they should stop speaking badly about the man of God.

“I pray the satanic agents should be the only ones to suffer this. I said, our God will get back to them. Warn your family and brothers about their talk. You will know I am a man of God this time. People who are looking for your downfall and run to disturb your spirit, warn them to be careful of their tongues and the people who come to them. God is a God of vengeance – anybody can go for it.”

According to the pastor, as they (critics) cannot help him with the consequences of the tragedy, they should at least avoid rubbishing the ministry, otherwise they might “suffer”.


“People are using this to gain money and friends. This is a warning. Whatever people want to write let them write; they will be the ones to read it. I said our God would get back to them. He has started somewhere. He is coming. If your brother is involved, unless he can resurrect the people who died, he will join them. If you can resurrect the people who died, you can go free.”

It would be recalled that T.B. Joshua came under fierce criticism following the September 12 incident. The accusations came one after another: SCOAN stopped rescuers from working on the site, the reconstruction of the collapsed building was unapproved, Joshua bribed journalists for them to cover the story in a different way, the cleric’s miracles is a fraud, etc.

Many survivors are still recovering after the collapse and are yet to get through the trauma the suffered.