Thousands Of Spiders Take Over Home 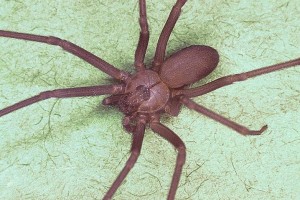 Exterminators are fumigating a Missouri home to eliminate the estimated 6,000 venomous brown recluse spiders that drove away the previous owners.

The 2,400-square-foot Weldon Spring home, which was foreclosed and is now owned by Fanny Mae, was covered by a tent this week by McCarthy Pest Control and filled with 200 pounds of sulfuryl fluoride gas to eliminate the arachnids.

The house was abandoned two years ago by Brian and Susan Trost, who purchased the home for $450,000 in 2007. The couple said the spider problem was not disclosed by the previous owners, but they started noticing the arachnids the day of their move.

The Trosts filed a lawsuit against the previous residents, Tina and David Gault, and an expert testified there were an estimated 4,500 to 6,000 spiders in the home as of 2011. The Trosts said they were forced to abandon the home in 2012 when repeated attempts to get rid of the spiders failed and their numbers continued to increase.

The Trosts won a $472,110 settlement in the lawsuit, but said they have yet to receive any money.

Missouri Department of Conservation experts said brown recluse spiders are venomous, but it is difficult for them to pierce human skin. Their bites have been known to cause pain and infection, but death is unlikely.

Tim McCarthy of McCarthy Pest Control said the fumigation will get rid of the spiders and their eggs.

“There’ll be nothing alive in there after this,” he told the St. Louis Post-Dispatch.