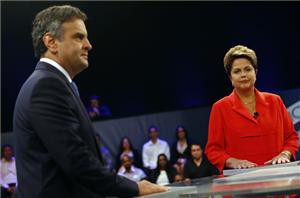 Brazil’s 142.8 million voters are set to head to polls to elect their next president, weighing 12 years of social progress against a yearning for economic revival, and for change.

Leftist incumbent Dilma Rousseff is the narrow favorite heading into the vote on  Sunday, with a two to six point advantage over center-right business favorite Aecio Neves in the race to lead the world’s seventh-largest economy, according to Saturday’s final surveys.

Polling by Datafolha gave Rousseff a 52-48 percent lead, just on the two-percentage-point margin for error, while indicating it saw a “probability” of her winning the contest.

An Ibope Institute poll for its part showed Rousseff ahead by 53-47 percent, breaking the technical tie.

Winning back front-runner status has been a battle for Brazil’s first female president – a former guerrilla once jailed and tortured for fighting the country’s 1964-1985 military regime.

The vote is widely seen as a referendum on 12 years of government by her Workers’ Party (PT) – eight under working-class hero Luiz Inacio Lula da Silva and four under Rousseff, his seemingly less-charmed successor.

The party endeared itself to the masses with landmark social programmes that have lifted millions from poverty, increased wages and brought unemployment to a record-low 4.9 percent.

But after Brazil benefited from an economic boom during the Lula years, the outlook has darkened since Rousseff won the 2010 election.

On Saturday, Rousseff campaigned in her stronghold of Porto Alegre, while Neves headed to Sao Joao del Rei, the hometown of his late grandfather and post-dictatorship president Tancredo Neves.

“Clearly this has been an election that has been the tightest and most competitive election in the last 20 years,” a source reported from Sao Joao del Rei. “Ultimately on Sunday, it will be the Brazilian people who ultimately will have the last say.”

Brazil’s voters are divided along social lines on election day.

The poor, particularly in the impoverished northeast, are loyal to the Rousseff’s party, thanks to landmark social programs that benefit 50 million people and have helped 40 million exit poverty in the past 12 years.

The country’s elites are meanwhile exasperated with interventionist economic policies such as gasoline price controls and high taxes.

The battle is for the newly teeming middle class in the industrialized southeast, the cradle of the million-strong protests last year.

This demographic is torn between voters loyal to the PT’s transformative social policies and those frustrated with Rousseff’s government.

“The country is divided, and whoever wins will need to reach out to the opposition,” said Lourdes Casanova, an emerging markets specialist at Cornell University in New York state.

Voters are also electing governors in run-offs in 14 states where no candidate took more than 50 percent in the first round.

Voting is compulsory in Brazil, Latin America’s largest democracy. Results in the electronic voting system are expected shortly after.